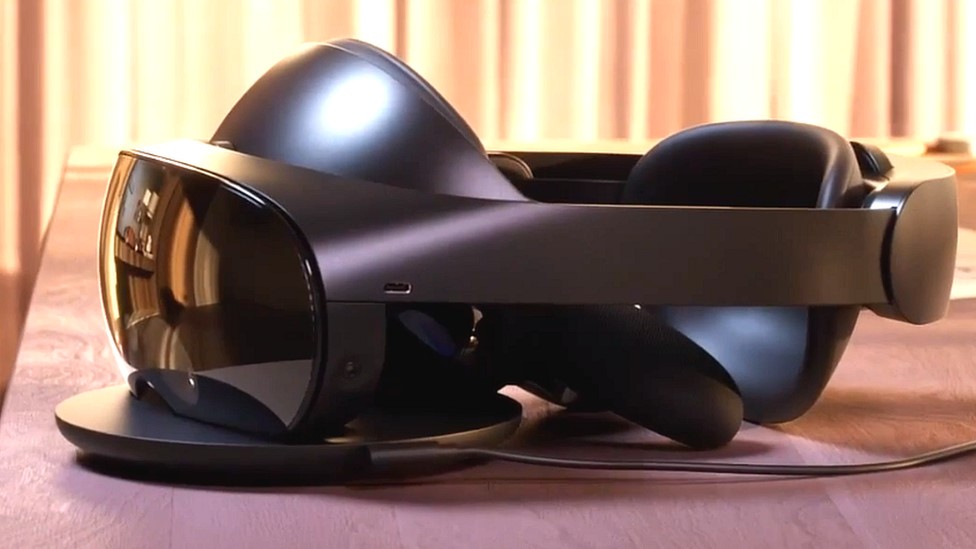 Last week in Las Vegas I boxed, hunted for cute aliens, flew a laser-shooting robot and drew my own masterpiece – all in virtual reality.

Some of the headsets I used to try out these experiences cost almost twice as much as the smartphone we used to snap the photo above. Arguably they have a lot less functionality, for now at least. So are they worth it?

Meta declined to tell us how many it has sold so far, but my guess is not that many. It is aimed at businesses and (wealthy) early-adopters, designed to be a teaser for Meta’s vision of the future, rather than a bestseller.

The hardware involved in VR has often been described as off-putting and, to be fair, it once was. Early headsets were renowned for being clunky and heavy, and many required tethering by cables to a high-end PC, powerful enough to process the graphics.

These new headsets are comparatively lighter and far more portable. The Vive XR Elite folds up into a case about the size of a tub of peanuts.

HTC’s newer headsets come with a clever little bit of internal design – you can adjust the lenses to correct common vision impairments, which is good news for short-sighted people like me who do not enjoy wearing glasses and a headset at the same time.

Both headsets lean much more towards mixed reality than the previous total immersive experience – you can always see your physical surroundings out of the sides of the Meta Quest Pro.

Most of the demos I tried with the HTC had the real world displayed via a camera behind the graphics. This meant my colleague Ammie avoided getting punched on the nose when my virtual boxing target ended up directly in front of where he was standing in real life.

I am using VR in this article as an umbrella term, and I think it is mixed reality, also known as augmented reality or AR, that is most likely to catch on. It is less about completely losing yourself in a virtual world – which is unsustainable for very long – and more about digitally enhancing your existing one, or flitting seamlessly between the two. That, in theory, will keep you in your headset for longer, or as long as the two-hour battery lifespan permits.

The HTC Holoride, for example, is designed for car passengers. It’s a set of games that move in sync with the speed of the vehicle you are in. If the car stops at red lights, so does your flying robot.

The Quest Pro demo was, to be honest, a bit odd. I had to use a kind of magical torch to search the floor for an alien, rabbit-like creature, who then bounced through the wall into a fantasy land, into which I was not allowed to step.

I then met an avatar with a youthful green face and pink flower petals for hair, who mimicked my facial expressions. It was, said Meta, an example of how I could appear in its metaverse, once it’s built.

Famously, existing Meta avatars don’t yet have legs (Meta founder Mark Zuckerberg said at the Quest Pro launch that “legs are hard”) and Flower Zoe was no exception. It was captivating, but also curiously detaching to watch this creature behave just like me.

VR has some practical applications. It’s often touted as a useful training device – surgeons can safely learn how to perform delicate operations, and engineers can practise fiddly aircraft repairs. It enables millions of people to attend large live events simultaneously – almost 11 million people attended the first concert to be held inside the game Fortnite, featuring the DJ Marshmello, in 2019. Many gamers love it.

But it’s still a novelty, rather than part of the fabric of our lives. Outside the tech sphere, many people I know have either never tried it, or maybe tried something once or twice in an arcade.

A word of warning though – I have come away from my week-long VR-fest with a spot of real-life conjunctivitis – so make sure those headsets get cleaned!

Even if you do decide to spend top dollar, don’t expect to find the experiences instinctive. The controllers take some practice. Picking up a guitar to play Guitar Hero with was frustratingly difficult using the HTC Vive XR.

Why couldn’t I just – you know – pick it up? I couldn’t get my virtual fingers to attach to the fret, and then when I thought I was moving the guitar closer to my body I ended up making it bigger. HTC conveniently lost the recording of my clumsy, thwarted attempts at being a virtual rock star, for which perhaps I should be thankful.

Finally, there’s a rather large, fruit-shaped hole in the entire picture.

As yet, there is no device from Apple – the tech titan whose iPhone transformed the mobile phone landscape back in 2007 (it wasn’t the first smartphone, but it was the device that broke through to the masses).

There have been various rumours and supposed leaks about a pair of AR glasses coming to market, potentially this year, but so far Apple remains characteristically silent.

Boss Tim Cook has previously described AR as “a profound technology that will affect everything” – so there’s little doubt that something is cooking in Cupertino, Apple’s US HQ.

Perhaps a bit of Apple magic will finally turn VR from a nice-to-have into a must-have – if the price is right.