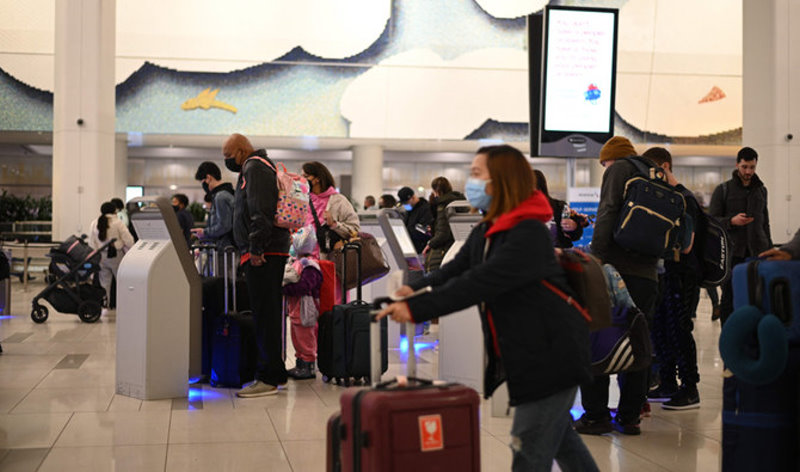 Global health authorities are urging against the use of “blanket” travel bans in response to the threat of new coronavirus variants, as some nations have rushed to shutter incoming travel from southern African countries where the omicron variant has been detected.

The same health officials also warn that travel bans could have a negative effect on global efforts to respond to the pandemic, as nations may not wish to report new data and variants if they worry they could be seemingly punished for it by other countries barring their nationals from travel.

“Blanket travel bans will not prevent the international spread, and they place a heavy burden on lives and livelihoods,” the World Health Organization said in a statement Tuesday. “In addition, they can adversely impact global health efforts during a pandemic by disincentivizing countries to report and share epidemiological and sequencing data.”

The WHO’s advice comes after it said some 56 countries were reportedly implementing travel measures aimed at potentially delaying the importation of the omicron variant.

In the U.S., Dr. Anthony Fauci, the White House’s chief medical adviser, told ABC News’ “This Week” anchor George Stephanopoulos this past Sunday that travel bans could “slow things down,” but they won’t prevent a new variant from coming into the country.

“What you can do is you can delay it enough to get us better prepared,” Fauci said. “And that’s the thing that people need to understand. If you’re going to do the travel ban the way we’ve done now and that we’re implementing right now, utilize the time that you’re buying to fill in the gaps.”

Fauci’s remarks notably came before the U.S. confirmed the first case of the omicron variant in California on Wednesday.

“Travel bans are a very weak measure at best, but they’re most valuable very, very early on in the emergence of a new variant,” said Dr. John Brownstein, a professor at Harvard Medical School, chief innovation officer at Boston Children’s Hospital and an ABC News contributor.

Travel bans can “buy you a little time,” he said, but only if they are implemented quickly and uniformly.

“The problem that we have here is that detection doesn’t mean being the epicenter of where the outbreak is,” Brownstein said. “Just because South Africa had incredible capacity to detect sequence doesn’t mean that necessarily this is where the most amount of cases occur.”

Some South African officials and scientists are calling the travel bans aimed at their country discriminatory and punitive.

South African President Cyril Ramaphosa echoed the WHO’s sentiments in remarks to reporters while traveling to Nigeria on Tuesday, saying South Africa should not be “punished” for travel bans after being transparent with its omicron detection and research.

“These bans must be removed, they must be lifted,” Ramaphosa said. “And in fact, we have advanced in the world to a point where we now know when people travel, they should be tested like I was tested last night, and I’m happy to be tested when I arrive again. We’ve got the tools we’ve got the means to be able to deal with this.”

Ramaphosa added that the open travel is critical for the tourism industry around the world, which he said has been “really devastated.”

“And for us, the tourism industry is one of the key industries for southern Africa as well,” he said. “So, this is unfair, this is discriminatory against us, and they are imposing a very unfair punishment.”

One of the South African scientists who helped identify the omicron variant similarly blasted the travel bans imposed on southern African countries as a result of their discovery.

Tulio de Oliveira, director of the Centre for Epidemic Response and Innovation in Stellenbosch, South Africa, tweeted Monday night that he had “spent a big part” of his day speaking with genomic and biotech companies because “soon” his team “will run out of reagents as airplanes are not flying to South Africa.”

In a series of tweets last week, de Oliveira urged the world to “provide support to South Africa and Africa and not discriminate or isolate it.”

“We have been very transparent with scientific information. We identified, made data public, and raised the alarm as the infections are just increasing. We did this to protect our country and the world in spite of potentially suffering massive discrimination,” he tweeted.

In an interview with the New Yorker, de Oliveira added that he was “very upset” with the events that took place after the discovery, specifically related to travel bans.

“The U.K., after praising us for discovering the variant, then put out this absolutely stupid travel ban, and it has hoarded vaccines for the last year,” he told the outlet. “It’s trying to put the blame on vaccine hesitancy. It’s looking for a reason to fault Africa.”

Brownstein, who also noted that countries would feel penalized, rather than incentivized, for reporting new variants, suggested that testing pre- and post-travel and “intense surveillance” would be “incredibly helpful and probably more valuable than the travel restrictions.” Travel bans, he said, are “not the best tool.”

“We have really robust testing, we have other tools at our disposal,” he said. “We should be in a position where we don’t need to implement these things.”

Dr. Tedros Adhanom Ghebreyesus, the WHO director-general, said in remarks Tuesday that it was “deeply concerning” that countries “are now being penalized by others for doing the right thing.”

“I well understand the concern of all countries to protect their citizens against a variant that we don’t yet fully understand,” he said. “But I am equally concerned that several Member States are introducing blunt, blanket measures that are not evidence-based or effective on their own, and which will only worsen inequities.”

“The global response must be calm, coordinated and coherent,” he added.