A Look Inside Nicki Minaj And Rihanna’s Relationship 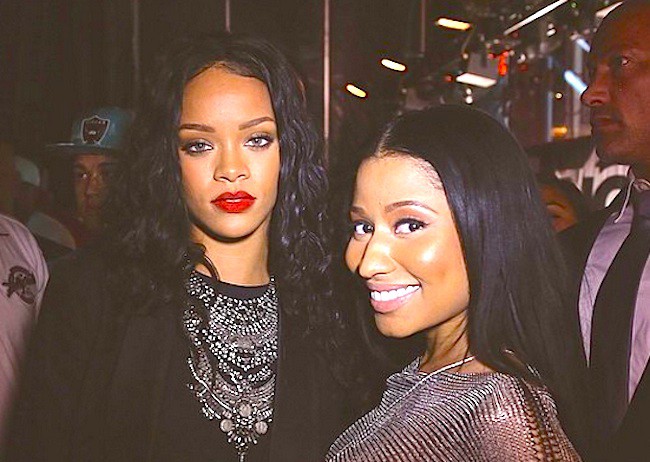 Nicki Minaj and Rihanna have had their ups and downs in their friendship; are things looking up for this musical pair?

Celebrity friendships are always mesmerizing to fans, and eager eyes have been on Nicki Minaj and Rihanna’s relationship for a long time now. The sheer impact that each of these ladies has on their own fanbase is astounding, and when they team up, they’re immensely powerful in the world of music. Of course, fans get a real kick out of watching them hang out during their off-time and are quick to soak up the very few images that these ladies have posed together for.

Rihanna and Nick Minaj’s friendship was on full display for a while, as they collaborated on music together. Suddenly there was a long period of silence, which has recently evolved into a pleasant surprise for fans. These powerful ladies are hanging out with one another again, and fans are excitedly hoping that this means they’re going to be collaborating on new music again.

How Nicki Minaj Felt About Rihanna

In the earlier days, before these powerhouse ladies became friends, Nicki Minaj idolized Rihanna and could only ever dream of meeting her one day. She truly aspired to work with her and expressed her intrigue with Rihanna during a series of interviews. Minaj opened up about how much she admired Rihanna’s talents by saying, “I wanted to work with Rihanna for a long time. I’m very proud of her accomplishments; especially since she was born on an island like me.” She must have manifested it, as her wishes definitely came true.

All friendships are based on common interests and for Rihanna and Minaj, it seems they both bond over their heritage and island-roots. Rihanna was born in Barbados and maintains strong ties to her homeland, and Nicki Minaj was born in Port of Spain, Trinidad and Tobago.

Minaj realizes how fortunate she is to have made it big in the music industry, especially considering her very modest, humble beginnings and sees the same level of success from Rihanna’s upbringing. Their “island girl” success story is one that connects them to one another.

Nicki Minaj and Rihanna exceeded all fan expectations when they collaborated on Pink Friday. Their 2010 hit single “Fly” became an immediate hit and topped charts across the globe for several weeks. The ladies commanded spot 19 on the Billboard Hot 100 and went on to sell over 1.5 million copies in the United States alone. The duo proved they could churn out sensational music when they combined their talents, and fans demanded more.

Now that they had a perfect formula in place, Rihanna and Nicki Minaj went on to show the world their hit song wasn’t just a collaborative one hit wonder. Nicki returned the favor by lending her talents on Rihanna’s LOUD album, with the song “Raining Men.” Of course, the song was a huge hit and the ladies saw success as a team, once again.

What Happened To Nicki Minaj And Rihanna’s Friendship

At some point, something went wrong between Nicki Minaj and Rihanna – or did it? Fans can’t be sure exactly what happened or if anything did, but they weren’t spotted together and seemed to unfollow one another on social media at some point along the way.

There were rumors about a feud existing between them, but that was never confirmed. The unfollowing was a sure sign that something went wrong, but there haven’t been any concrete details surrounding this bizarre situation.

Big credit goes to both Rihanna and Nicki Minaj for not airing their grievances in the public sphere. Neither of them has ever said anything distasteful about the other, and they have been careful to refrain from entering into a diss-war, which seems to be the common go-to for feuding musicians these days. Whatever it is that happened between them, has been kept between them, in a classy way.

When Nicki Minaj And Rihanna Followed Each Other On Instagram

May 2021 was fully loaded with surprises, as eagle-eyed fans noticed Rihanna and Nick Minaj had started following one another on Instagram once again. Whatever it was that had irked them in the past had clearly been resolved, or at the very least, put to rest, as the two ladies once again decided to learn about one another’s social media updates.

September was another big moment for the pair as they suddenly surprised fans with group date photos that nearly broke the internet.

Rihanna and Nicki Minaj shared photographs of themselves hanging out and sharing time with Minaj’s son, as well as her husband, Kenneth Petty, and Rihanna’s main squeeze, A$AP Rocky. There was no context provided for the photo, but it was an obvious statement of love and friendship between the group of high-powered stars.

It’s one thing for Rihanna and Nicki Minaj to spend time together, and it’s a whole other territory when Minaj is opening up her entire life to Rihanna and A$AP Rocky, by being open to having them spend time with her infant son, Jeremiah. Fans speculate that the group date photo was taken in Minaj’s home, and many fans commented on the fact that Minaj’s baby boy was part of the sudden reunion with Rihanna.

Their Men Are Part Of Their Friendship

Rihanna and Nicki Minaj have carried forward with their friendship, and fans are thrilled to see them together. It’s obvious that they’re in it with future goals in mind, considering that even their men are part of their current hangouts. Seeing Kenneth and A$AP Rocky join the ladies as they enjoy time off together is a sure sign that they’re deeply re-connected and plan on spending a lot more time together in the future. Fans are all-in, and of course, are still dreaming of another musical collaboration.