Trevor Noah Says Kanye West Should Be Counseled, Not Canceled After Grammys and Instagram Bans 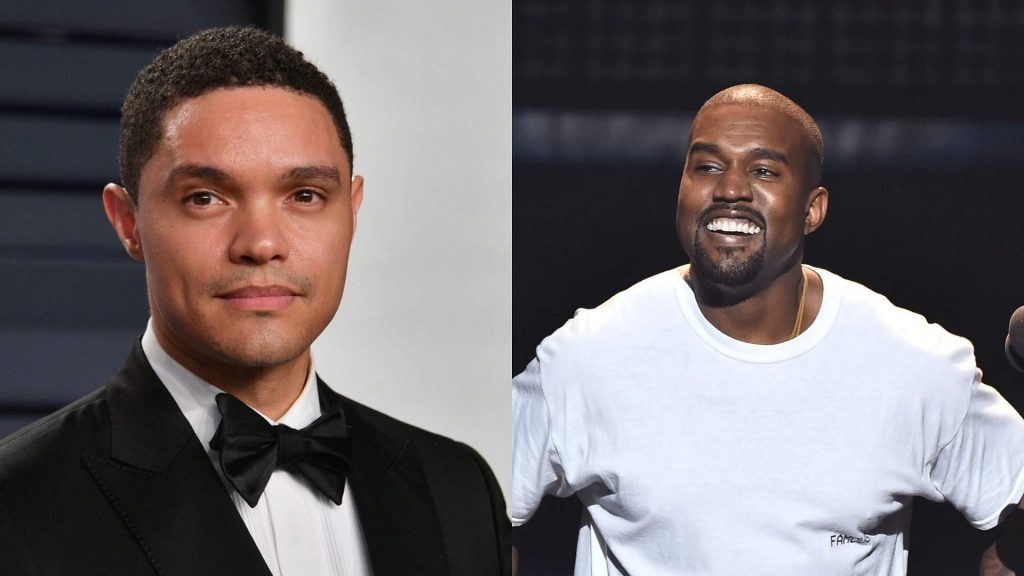 Trevor Noah has issued a statement about Kanye West, who recently penned a racist post about the Daily Show and Grammys host and was also recently banned from performing at the ceremony.

After the news of the rap artist’s recently Grammys performance ban amid “concerning” online behavior and a 24-hour suspension from Instagram for directing a racial slur at the Daily Show host, the comedian, who is hosting the upcoming music award ceremony, issued a statement on Twitter on Sunday, March 20.

The tweet from the host, who has spoken out against “cancel culture” before and has himself faced criticism over some past jokes, comes a day after Kanye’s rep confirmed to E! News a March 18 report from The Blast, which quoted sources close to Ye as saying that the Donda rapper’s team was told over the phone that evening that he was pulled from the lineup of performers for the Grammys due to his “concerning online behavior.”

E! News has reached out for comment from the Recording Academy, the group behind the ceremony, about the cancellation and about Noah’s tweet but has not heard back. Kanye’s rep also had no immediate comment about the host’s recent remarks.

A source close to Noah reiterated to E! News that the host himself “never asked the Grammys to ban Kanye from performing” at the award show, in which the rapper is nominated for five honors.

“He was not offended by Kanye’s Instagram post and Trevor responded on Instagram,” the source added. “The notion that Trevor or his team asked the Grammys to ban Kanye is ridiculous.”

Last week, Kanye was suspended from Instagram for 24 hours after posting a racial slur directed at Noah, with parent company Meta saying Ye violated the group’s policies on hate speech, bullying and harassment. In recent weeks, the rap artist has mostly used Instagram to express grievances with ex Kim Kardashian and her boyfriend Pete Davidson, whose likeness is subjected to violence in Ye’s recently released “Eazy” music video. Following a backlash about the footage, Kanye wrote, “Art is therapy” and “is not a proxy for any ill or harm.”

Ye had shared his offensive post about Noah a day after the host expressed concern about the rapper in a serious monologue on The Daily Show, during which he cited what he called the rapper’s “belligerent” behavior and treatment of Kim and Pete.

Noah noted that from age 9, he grew up in an abusive relationship and recalling a memory of learning about his own mother being shot and wounded by his stepfather,. “What I see from the situation [about Kanye],” he said, “is a woman who wants to live her life without being harassed by an ex-boyfriend or an ex-husband or an ex-anything.”

Both Kanye and Pete have in the past spoken publicly about struggling with their mental health. During a recent text exchange between the two, the SNL star texted Kanye a selfie, saying he was “in bed” with Kim, before offering to “help” him. In his Daily Show monologue, Noah expressed criticism of Pete’s move.

“Now you’ve added to the mental health of a person that you’re trying to help them with,” Noah said. “It’s a little bit like roasting somebody while you’re giving them CPR.”

In his comment on Kanye’s since-deleted Instagram post about him, Noah expressed compassion for the rapper, telling him, “There are few artists who have had more of an impact on me than you Ye…Which is why it breaks my heart to see you like this.”

He continued, “I don’t care if you support [Donald] Trump and I don’t care if you roast Pete. I do however care when I see you on a path that’s dangerously close to peril and pain. You have every right to fight for your family. But you have to know the difference between that and fighting your family…If you’re just joking about it all and I’m an idiot for caring, then so be it. But I’d rather be the idiot who spoke up and said something to you in life, than the cool guy who said nothing and then mourns for you in prison or the grave.”