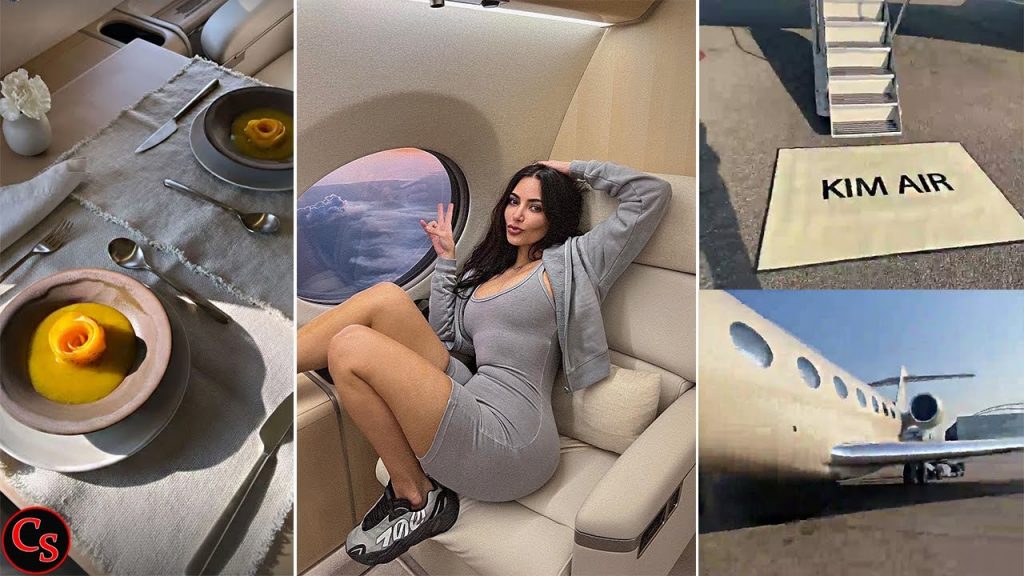 Not only does Kim Kardashian’s expensive jet fit 18 people and can sleep 10, but it is also the longest-range business jet in the world.

While Kim Kardashian’s estranged husband Kanye West continues to attack her new beau Pete Davidson, the Keeping Up with the Kardashian star has been focused on putting herself first. “My 40s are about being Team Me,” she recently told Vogue. “I’m going to eat well. I’m going to work out. I’m going to have more fun, spend more time with my kids and the people who make me happy.”

In the Kardashian world, having more fun with your loved one’s means flying on a private luxury jet. Recently, the beauty billionaire showed off her $150 million private plane called Kim Air. It’s reportedly custom-made “from the ground up.” Here’s a mini-tour.

In a recent house tour with Vogue, Kardashian showed three of her favorite cars — Lamborghini Urus, a Rolls-Royce Ghost, and a Mercedes-Maybach sedan — all painted in a custom shade of gray. She spent over $100 million on the paint job, so they’d match her mausoleum of a home in Calabasas. Her new private jet, a Gulfstream G650ER, also got the same look. The exterior has the same Créme color as the outside of her mansion.

Reports say that a new G650ER typically costs around $70 million to $95 million. Though it’s unknown if the aspiring lawyer bought it new or used, the custom design certainly upped the price tag. She bought the plane for $95 million and spent about $55 million on the personalized details. The Kardashians star had the plane done “from the ground up,” according to TMZ. She also waited a year to get the jet, which is apparently hard to come by these days. It’s due to its popularity among the richest including Jeff Bezos who also owns one.

Currently, the longest-range business jet in the world, Kim Air can seat up to 18 people and has room for 10 people in its sleeping area. Its specs include enhanced air ionization which enables passengers to always breathe “outside fresh air.” With its whisper-quiet travel, we’re sure the mom-of-four would have a relaxing time on the jet, even if she’s traveling with all the Kardashian-Jenner kids. According to reports, Kardashian would be spending $400,000 in fuel for 200 flying hours per year, plus $100,000 for maintenance.

Like Kardashian’s house which is gray on the outside but all-beige-and-white on the inside, Kim Air also has an all-beige cabin. It’s an all-beige cashmere and leather interior. Even the placemats and plates match those in the reality star’s home. Kardashian worked with designers Tommy Clements and Waldo Fernandez for the interior design. Guests are also given a complimentary kit with Skims pajamas and slippers. Recently, Kardashian threw a slumber party on the jet for her friend Natalie Halcro’s birthday. They posted photos of them wearing pink Skims co-ords while lounging in the cabin.

You can say the reality star’s living her best life these days amid her divorce battle. However, fans aren’t so supportive of Kardashian’s recent splurge. “Kim Kardashian, one of the richest women on Earth, posting a scam giveaway and showing off her new private jet,” a netizen tweeted alongside a screenshot of Kardashian’s latest Instagram ad post. “Could she not have at the very least waited till two weeks from now? Or crazy idea, donate the money to causes that need it.” However, it’s not the first time the beauty mogul was slammed for flying private…

Kim Kardashian & Kanye West Were Bashed For Flying Private In 2018

In 2018, Kardashian had a series of Instagram Stories with Ye, showing that they boarded a private 747 plane for their vacation. It that had dining rooms, bedrooms, an office, and even a space for working out with a trainer. Fans were quick to bash the couple for “killing” the environment. “I don’t know the circumstances of why Kim flew on a private 747 (and she has the entire to do so),” tweeted a netizen. “But in my head I’m just like: CARBON FOOTPRINT Like, the amount of gas it takes to flight that thing is surreal and it all just seems crazy unnecessary to me…”

This is so bad for the environment @KimKardashian we all know you’re overwhelmingly wealthy no need to convince us, at least take a private jet geez pic.twitter.com/DDXmX8fAIP

“So obnoxious and unnecessary,” added another fan. Others also thought it was odd that the couple flew private even if they publicly support and donate to environmental causes. “I’m missing the connection. @KimKardashian and @kanyewest donate 500000$ to wildfire relief efforts, but take a 747 airplane privately. Will someone explain to them how the climate crisis work? Please?”