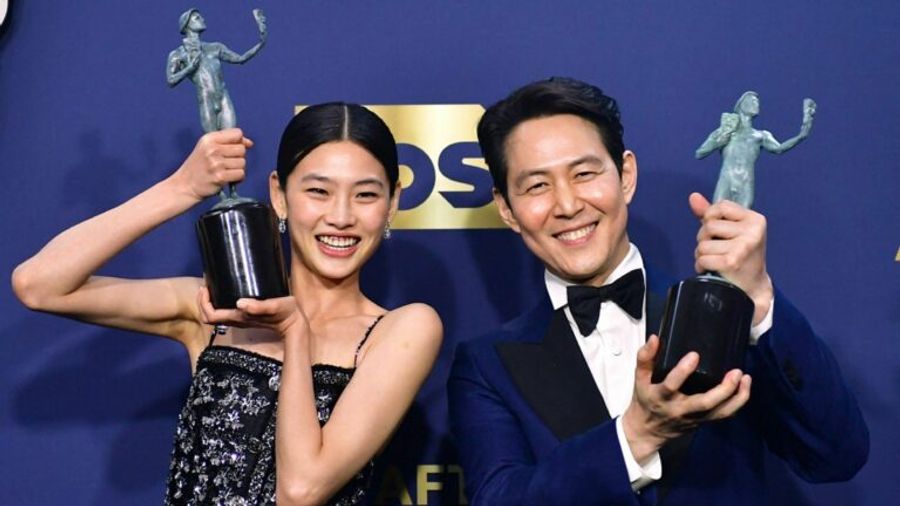 More Hollywood reporters have come under fire for asking foreign celebrities questions that some viewers have found demeaning. The latest incidents involve “Squid Game” actors Lee Jung-jae and Jung Ho-yeon after both had just received awards from the Screen Actors Guild Awards on Sunday.

Backstage at the ceremony, where Lee and Jung each won Outstanding Performance of a Male/Female Actor in a Drama series on top of another award secured by the show, the actors were asked by an “Access Hollywood” reporter what they were “going to miss the most about being anonymous.”

After a translator relayed the question in Korean, Jung quickly replied, “Nothing,” while smiling back at the reporter, as Lee simply laughed beside her.

Viewers of the Q&A session that was posted online have criticized the reporter for failing to realize that both Lee and Jung had already been well established in the acting and modeling industries, respectively, before they rose to even greater global fame from “Squid Game.”

Critics argue that a lack of recognition from Western media does not make successful actors and artists any less notable in their respective fields in other parts of the world.

On the same night, E!’s red carpet reporter spoke to the pair about what it was like for them to be near some of Hollywood’s big actors.

“While you all were sitting in the audience tonight, were there some big American actor names that you said, ‘Whoa, I’m sitting right next to Leonardo DiCaprio or Lady Gaga or Jessica Chastain’?” she asked.

In addition to the reporter referring to Lee by his last name, commenters also criticized the questions for allegedly directing attention away from the actors’ own successes to instead highlight Western celebrities.

“It’s real cringy [sic] when interviewers divert the spotlight away from the international actors to ask what American actors they fan over and half the video becomes that. Is it too much to ask for them to have 2 full minutes be about themselves?” one user wrote in the video’s top-liked comment.

Lee has long been considered a household name in South Korea, with a career spanning nearly 30 years before he appeared as the lead in “Squid Game.” His performance as a bodyguard in the 1995 drama series “Sandglass” cemented his status as one of the country’s leading heartthrobs.

Jung, on the other hand, was a newcomer when she took on the role of Kang Sae-byeok but had already walked the runways of many of the world’s top fashion labels as an international model.

While she now boasts a staggering 23.5 million followers on Instagram, putting her at the top of South Korea’s most followed actresses, she already had a hefty 400,000 followers before her acting debut.

This isn’t the first time Lee was asked this sort of question. Back in November, a reporter from “Extra” received similar criticisms after she stopped Lee on a gala red carpet to ask, “I’m sure you can’t leave the house anymore without people recognizing you. What has been the biggest life change for you since the series came out?”

Lee took the time to answer the question gracefully, acknowledging that he’d been recognized more frequently while specifying that these experiences were in the context of the United States.

In April last year, Korean actress Youn Yuh-jung, who earned global praise for her performance in “Minari,” experienced a similar incident after the 2021 Oscars. Despite making history as the first Korean actress to win an Academy Award, reporters drew criticism for centering the questions around Brad Pitt, who produced the film, rather than her achievements throughout her decades-long career. One reporter even went so far as to ask about what he smelled like to her, infuriating many social media users on the way American reporters seemingly undermined her accomplishments.