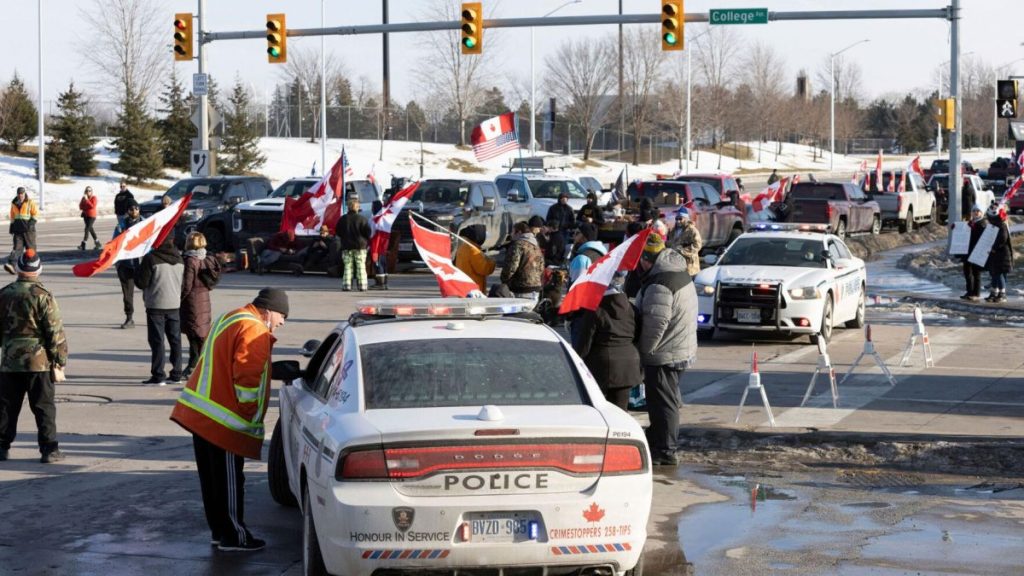 The anti-vaccination trucker protest that has paralyzed the Canadian capital, Ottawa, has spread to Michigan’s border and threatens to create chaos in an auto industry already struggling to cope with what industry experts have described as a “fragile supply chain.”

Demonstrators have been setting up blockades at the two bridges linking Ontario and Michigan since Monday. The Blue Water and Ambassador bridges together serve thousands of trucks every day, many of them carrying automotive parts and finished vehicles.

Traffic over the Ambassador Bridge has come to a virtual halt. Only a small number of trucks moved from Canada to Michigan on Wednesday. The situation at the Blue Water Bridge connecting Sarnia, Ontario, to Port Huron, Michigan, isn’t much better, with reported delays of at least 4½ hours.

On Wednesday, the Chrysler Pacifica minivan plant became the first direct casualty. Officials with the leading global automaker Stellantis temporarily halted production at the factory because it doesn’t have enough parts. Ford on Wednesday became the second manufacturer to take steps to deal with parts shortages.

“While we continue to ship our current engine inventory to support our U.S. plants, we are running our plants at a reduced schedule today in Oakville [Ontario] and our Windsor engine plant is down,” Ford said in a statement.

General Motors, Detroit’s largest automaker, confirmed late on Wednesday that it had temporarily cut the second shift at a plant in Lansing, Michigan producing SUVS for the Buick, Chevrolet and GMC brands. Toyota also shut down production at three of its plants in Ontario due to parts shortages from the trucker blockade.

It could be a matter of hours before other automakers, domestic and foreign, have to take steps at assembly and parts plants within hours of the two bridge crossings.

“Blockades at Canada’s borders are threatening fragile supply chains already under pressure due to pandemic related shortages and backlogs,” Brian Kingston, the CEO of the Canadian Vehicle Manufacturers’ Association, said in a statement.

“We are calling on cooperation from all levels of government to resolve this situation and bring an immediate end to these blockades.”

Truckers have been tying up traffic in Ottawa since last month, protesting mask and vaccination mandates. Prime Minister Justin Trudeau decried the demonstrations this week, insisting the protesters are “trying to blockade our economy, our democracy and our fellow citizens’ daily lives.”

“It has to stop,” Trudeau said. But, if anything, the protest has spread, and on Monday, a vanguard group began blockading access to the Ambassador Bridge, which links Windsor, Ontario, to Detroit.