Jute$ was spotted walking hand in hand with Demi Lovato for a dinner date on Aug. 16. Find out more about him here.

Demi Lovato, 29, debuted her new beau to the world when she stepped out with him for a dinner date in New York City, NY on Aug. 16. The singer was hand in hand with the musician Jute$ during the outing, finally putting a face to the unidentified love interest mentioned in several headline-making reports over the past few weeks. The new lovebirds looked stylish during the date, with Demi rocking a black and white leather jacket over a black graphic tee, striped skirt, and boots, and Jute$ showing off a black sweater with white stars, ripped jeans, white sneakers, and a white bucket hat. 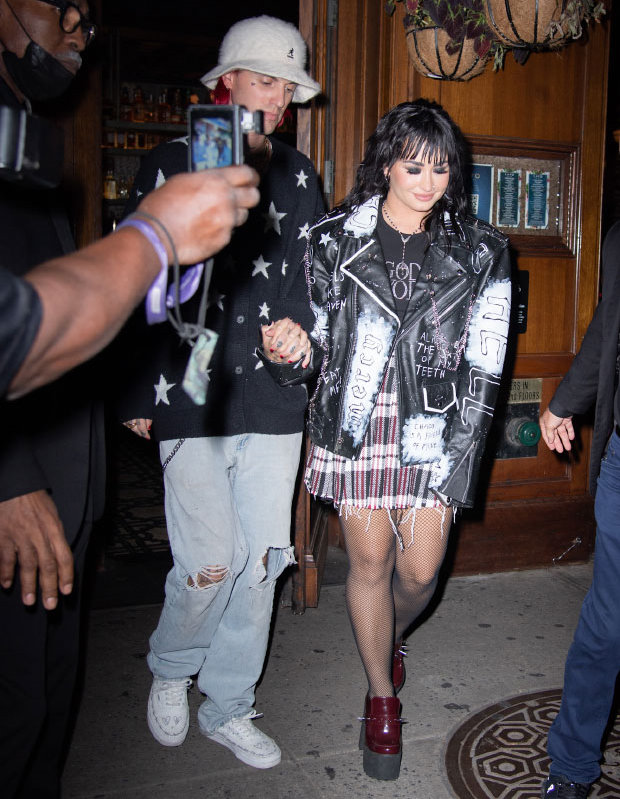 Find out more about the new hunk in Demi’s life below!

first single off my upcoming project is finally out! feels good to be back. RT this for me if u dig it, love u 🖤https://t.co/zgMhvDqttx pic.twitter.com/7B1WfdGrwH

Jute$ has reportedly been signed to Capitol Records and released music as an independent artist. He uses social media to promote his songs and has a large following of over 90K on Instagram. In early Aug. 2022, he released “Hollywood Hillbilly,” the first single off his latest project, and shared a music video to social media. He also has a single called “Out the Door” being released in early Sept.

He worked on one of Demi’s songs.

The talented artist and songwriter took to Instagram to reveal he helped write her 2022 song “Substance” and admitted it was “one of the hardest projects” he’d ever heard. “substance by @ddlovato out now!! one of my fav songs i’ve ever worked on,” he wrote in the caption.

“when i got asked to pull up and write for this session i remember thinking wtf am i supposed to do in a demi lovato session?” he continued. “only to show up and realize she was making one of the hardest rock projects i’ve ever heard. obviously a crazy milestone for me but beyond that i feel so blessed to be a part of something i’m such a big fan of. cheers to the whole gang .”

He has a lot of tattoos.
It’s clear to see that with the amount of tattoos Jute$ has, he must love body art. The rocker often shows off them off in pics and videos and they appear to be on both of his arms, hands, neck, chest, back, legs, and even his face. Some of the art that’s featured includes a dollar bill, music notes, and the phrase, “Chin up, beautiful.”

His hair color often changes.
In his various social media pics and videos, Jute$ has donned blonde, red, and pink hair. He also likes to wear a lot of different types of hats, including trucker hats, baseball caps, and knit caps.

He and Demi are reportedly in a ‘happy and healthy’ relationship.
A source previously told People that the new couple is a great one and Jute$, who was unidentified at the time, is a “super great guy” who seems like the perfect partner. “It’s a really happy and healthy relationship,” the source told the outlet. Before she was in a romance with Jute$, Demi was engaged to Max Ehrich in 2020.