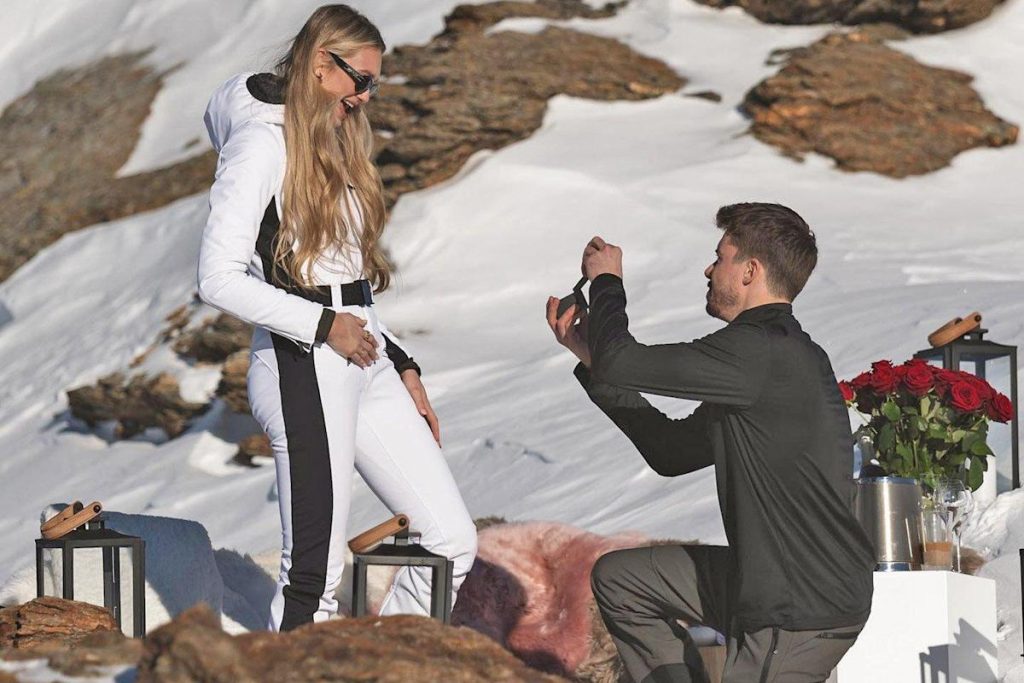 The 26-year-old Dutch-born model took to Instagram Tuesday to share that her longtime partner, Laurens van Leeuwen, proposed to her during a romantic trip to the Swiss Alps.

In the photos, the pair is dressed in snow gear as they enjoyed a picnic filled with cheese, fruit, champagne and other delicious treats. Van Leeuwen is seen proposing to his model girlfriend, who later gives him a big hug as she appears to say yes. Strijd also shows off the stunning sparkler in another shot.

“I said YES 💍❤️,” she captioned the proposal pics.

Van Leeuwen shared some snaps of his own, writing, “Let’s grow old(er) together @romeestrijd 👵🏼,” alongside a photo of him and his smiling fiancée flashing her new bling.

In May 2020, Strijd announced that she and van Leeuwen were expecting their first child together after a years-long struggle with PCOS.

“WE’RE HAVING A BABY ?,” Strijd said in a post shared to Instagram. “2 years ago I got diagnosed with PCOS after not getting my period for 7 years. I was devastated because being a mom and starting a family with @laurensvleeuwen is my biggest dream.. I was so scared that I would never be able to because I got told it was harder to get babies in a natural way.”

PCOS is a hormonal disorder, during which a woman’s ovaries may develop small collections of fluid and fail to regularly release eggs. Strijd said she started to research PCOS and came to the conclusion that she had the disorder due to her body being under “constant stress.”

“I never felt mentally super stressed so it was hard to understand this, but my life consisted of traveling all the time (no biorhythm), working out every day, eating super clean (restricting foods),” she wrote. “I think I pressured my body too much, and honestly every body is so different but I think my weight was not good for my body to function properly and couldn’t handle the constant traveling.”

“This was the point where I started to research natural healing for PCOS and came to the conclusion that I should do way less high intensity training, don’t restrict foods, be nice to myself, and take breaks when needed,” Strijd explained. “I also tried some natural supplements, acupuncture and we got a place back in the Netherlands as well, so we could spend more time with Family (since im such a family person).”

“I’m so happy and grateful to say that I got my period back last november AND that WE’RE SOON A FAMILY OF THREE ❤ ❤❤❤ & to the women trying to conceive, believe in yourself and be nice for yourself and your body and don’t let those thoughts get to you to much ?,” she added.

In a November 2019 interview with ET, Strijd and van Leeuwen opened up about their future together. Van Leeuwen, who had been with Strijd for 10 years at that point, said a proposal was “in the works.”

“I can’t wait,” Strijd said at the time. “I mean, I think it’s not gonna make a huge difference because we’ve already been together for 10 years. But I would love to celebrate it.”