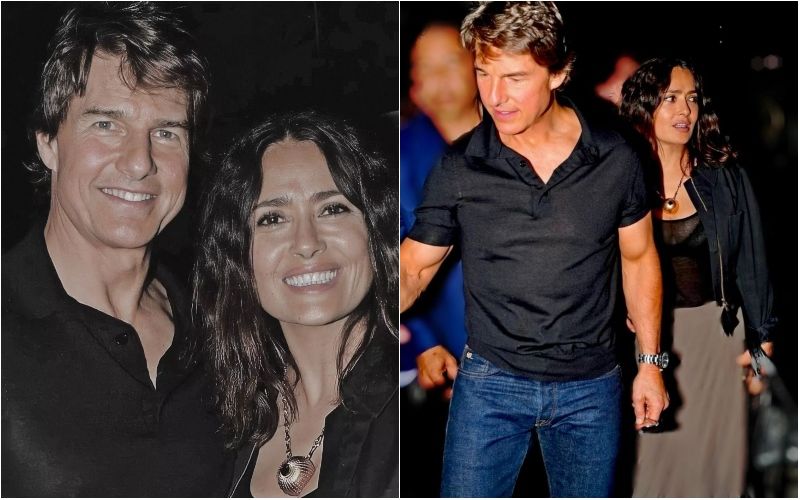 Tom Cruise and Salma Hayek stepped out for dinner recently. As fans saw the Hollywood celebs, they mobbed them for selfies.

Tom Cruise stepped out for a dinner outing with Salma Hayek recently. As fans spotted the Hollywood celebrities together they could not help but surround them for pictures. It was indeed a special moment for the fans to see the two stars together and they made the most of the occasion by clicking selfies and pictures.

Cruise is a fan favourite for a reason. He never lets down his followers who want a chance to click pictures with the Mission: Impossible star. During his latest outing, he was joined by none other than Eternals star Salma Hayek. The actress shared pictures and videos from the time on her Instagram handle. Videos show fans gathering around Cruise for selfies. Tom seemingly made the day of the fans by clicking pictures with them.

Hayek captioned her post, “When you take your friend Tom to dinner. Cuando invitas a tu amigo Tom a cenar. #tomcruise (sic).”

For the outing with his friend Hayek, Cruise opted for a black polo neck T-shirt with blue jeans. He looked dashing as ever. Hayek opted for a see-through top with a black jacket and grey skirt. The viral picture of Cruise and Hayek has got the fans gushing over the. Reacting to the moments, one of the social media users wrote, “Both of you are extremely hot (sic).” Another one said, “He is the best, he never says no for a photo (sic).”

Tom Cruise-led Mission: Impossible 7 has been titled Dead Reckoning: Part 1. The upcoming film will be released in two parts. Paramount has planned the seventh and eighth instalments as two back-to-back films and they are expected to bring an end to the franchise. Both films are being directed by Christopher McQuarrie, and will introduce new cast members Hayley Atwell, Pom Klementieff, Rob Delaney and Indira Varma. Mission: Impossible 7 – Dead Reckoning: Part 1 will open in the US theatres on July 14, 2023, with the eighth and presumably final movie coming out on June 28, 2024.