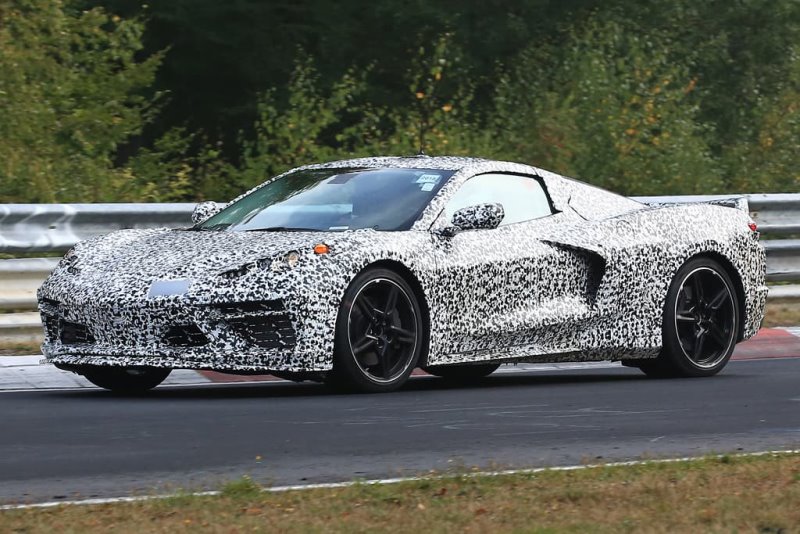 Car manufacturers regularly release pictures of their new vehicles in camouflage paint to amp up the curiosity of the people.
The reason behind that is they can test out both the interior or exteriors of the vehicle before making the final commitment to the design.
So, it was naturally expected that a car as important as the Chevrolet Corvette C8 will be making rounds around the town & so they did. A Chevrolet Corvette C8 in camouflage trim was spotted around the New York Times Square. Chevrolet has also released a few more pictures of the car from different angles, which allowed enthusiasts to get an idea about the car’s overall design.

Using the help of modern computers, the camouflage trim has been replaced with a normal paint job virtually & some images of what the Corvette might look like in its production stage have been established.
The most striking aspect of the new Corvette C8’s design is its lengthy wheelbase, caused due to its engine placement. There is a significant distance in between the lip of the door & the rear wheel’s arch which will be requiring some cover up with details on the surface to make sure it does not look bland.

Even though a lot has been revealed about the exterior of the car, some features still evade the imaginations of the car enthusiasts & spies alike.
The rear of the Corvette is yet to be seen & it is left to the imagination of the enthusiasts as to how the car’s rear lights would look like & how much would they stretch. Another one of the mysteries of the Corvette C8 is how the rear glass hatch will be opened.
Chevrolet has taken great care to keep that mechanism a secret for the time being by covering it with black tarpaulin & hide the engine as well. The doors are expected to have handles under the air intake, so to open a door, one has to reach under there.
This is a nifty trick which keeps the car’s look aesthetically pleasing.

More information is supposed to be revealed soon by Chevrolet.