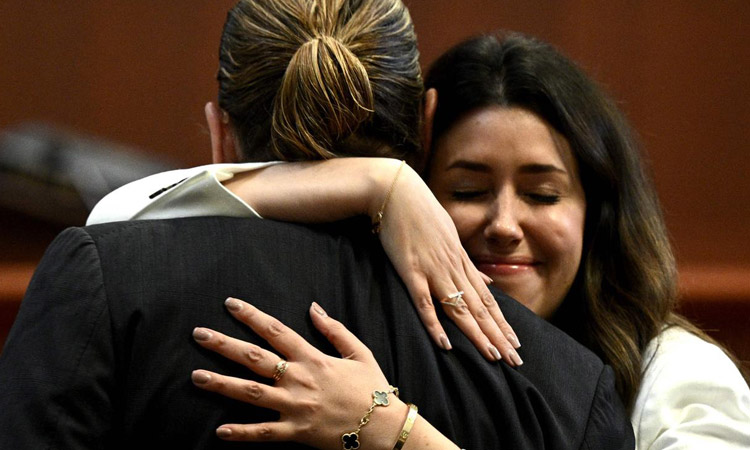 The Johnny Depp – Amber Heard trial was, by its very nature, a star-studded affair. And yet, neither of the two main characters came out with the most fans. Instead, it was Johnny Depp’s lawyer Camille Vasquez who emerged as the unlikely star.

Two big Hollywood celebrities. A troubled marriage. And a six-week-long televised trial that ended on Wednesday in a near-total victory for Johnny Depp against Amber Heard.

And yet, the person who seems to have walked away with the most fans is Camille Vasquez, Johnny Depp’s lawyer.

Through the trial, the internet lauded her for attitude and arguments. Here are the moments from the trial that catapulted her to fame.

During Amber Heard’s cross-examination, lawyer Camille Vasquez asked if she had already given the seven million dollar divorce settlement she had promised to give away to charity.

When Amber Heard said she had pledged it to different charities, Camille Vasquez pointed to the difference between the words ‘pledge’ and ‘donate’. “Ms Heard, respectfully, that’s not my question,” she famously said.

When Amber Heard was on the stand the first time, Camille Vasquez and the rest of Depp’s team made more than 40 objections in a short amount of time, many of them sustained by the judge.

A video of Camille Vasquez objecting to Amber Heard’s legal team during a session amassed more than 17 million views on TikTok.

The world seems to find it difficult to highlight a woman’s competence without also speculating on her dating life. Camille Vasquez became much-talked-about after she and Johnny Depp shared hugs and smiles in the courtroom with people wondering if the pair were a couple.

In a video that went viral, Camille and the rest of Johnny Depp’s legal team were seen exiting the court. As they reached the photographers waiting outside, a reporter asked Camille, “The people want to know, are you dating Johnny Depp?” Camille simply laughed and dodged the question.

Johnny Depp and Amber Heard met on the sets in 2009 and started dating a few years later. In 2015, they got married. In 2016, Heard filed for divorce and alleged that Depp had physically abused her during their marriage under the influence of drugs or alcohol. Depp denied the accusations and stated that Heard was “attempting to secure a premature financial resolution by alleging abuse.” Their divorce was finalised in 2017. Johnny Depp later sued Amber Heard for defamation because of an op-ed she wrote in the Washington Post in 2018. In the op-ed, headlined “I spoke up against sexual violence — and faced our culture’s wrath. That has to change,” Heard claimed that she was a domestic abuse survivor.

After a six-week televised trial, on Wednesday, the jury found Johnny Depp was defamed by Amber Heard in the op-ed. Depp won more than $10 million in damages, achieving a near-total victory in the defamation suit against Heard. A seven-person jury in Virginia also ruled for Heard on one counterclaim against Depp.

WHO IS CAMILLE VASQUEZ?

Camille M Vasquez hails from Los Angeles, California, United States. She was born to Leonel Vasquez and Marilia Vasquez in 1984 and has a sister named Shari K Vasquez. She completed her education at Southwestern Law School and attended the University of Southern California. Camille started working with Brown Rudnick LLP as an associate attorney in 2018.